Water has unique properties that make it a perfect medium for industrial applications, in particular for heat transfer. However, issues like corrosion and scale formation might be brought on by the solvent’s characteristics. To solve these issues, it is mandatory to have a comprehensive knowledge of water chemistry.

Water is only dissolving many compounds but also dissolves more substances than any other liquid, thus it is considered the universal solvent. Water molecule is polar with partially-positive and negative charges, which gives water the ability to dissolve ions and polar molecules.

Due to the property of water as a good solvent many impurities can exist in water where anything other than water molecules in water is considered as an impurity.

The amount of impurity in water is measured in milligrams per liter (mg/L), which is equal 0.0001%, in diluted solutions it is common to refer to level of impurities in parts per million (ppm) since a one liter of water weighs 1,000,000 mg, considering that in density of water is ~ 1 g/cm3

In water treatment application it is important to define these impurities, then based on the planned use of water we specify criteria for the acceptable levels of each impurity, and develop cost-effective treatment strategies to meet the predetermined quality standards. It is essential to understand that the terms impurity, contamination, and pollution are relative qualities of water. 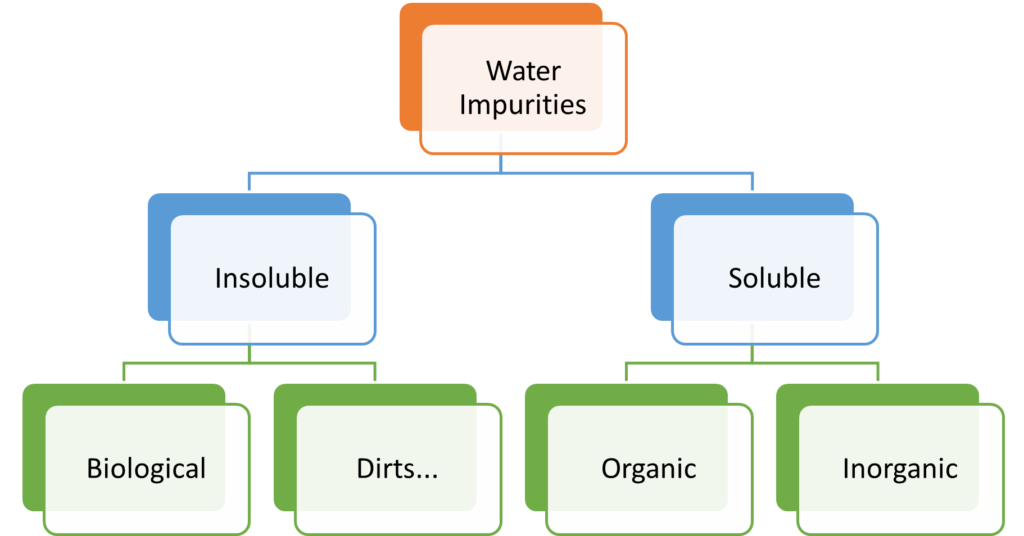 Organic compounds are classified in a separate category, because some organics, even at low levels, can be harmful to human health in drinking water or cause disturbance in industrial systems, whether they are soluble or insoluble.

Biological growth like microorganisms, bacteria, or algae is also categorized separately, owing to the complexity of these living creatures and the generated by-products caused by them.

The following classification of the impurities enables a logical explanation of each set of components and their impact on industrial systems:

The below list demonstrates the complexity of water-based systems as well as the difficulties that might arise when employing natural water in industrial, or municipal water systems.

Solubility is defined as the maximum amount of a substance that will dissolve in a given amount of solvent at a specified temperature. Solubility is a characteristic property of a specific solute–solvent combination, and different substances have greatly different solubilities. 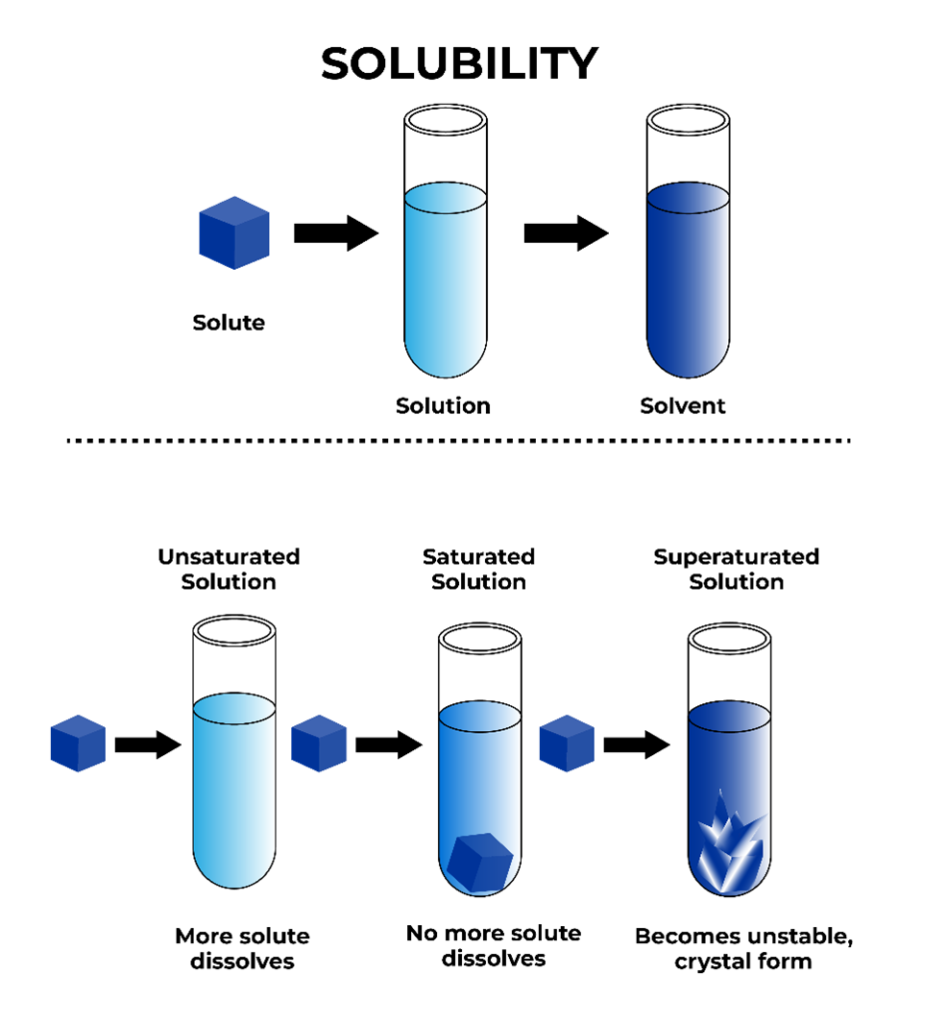 Figure 3: Solubility levels of a substance in water

The following are the solubility rules for common ionic solids, these rules are general and have some exceptions, but it gives an overview on salts’ solubility in water:

The solubility product constant, Ksp is the equilibrium constant for a solid substance dissolving in an aqueous solution at a given temperature. So, the more soluble is a substance, the higher the Ksp value it has.

As an example of a common substance in water, calcium carbonate (CaCO3) solubility product can be calculated as followed:

Where the ions between square brackets express the concentration of each ion in mol/L.

Adding an extra amount of carbonate ions will be reflected in the reduction of calcium ions concentration, at a given temperature, since the solubility product is constant. This concept enables us to predict the possibility of having precipitation of a certain chemical inside an industrial water system.

It is well known in the water treatment field that pH is one of the key parameters considered while studying water characteristics for a system. pH is defined as a quantitative measure of the acidity or basicity of aqueous or other liquid solutions.

It is important to understand how pH affects the treated systems. The goal is to apply these principles while putting a treatment program for a processed water. To understand the pH value, it is mandatory to know the equilibrium reaction of water dissociation into Hydrogen and hydroxyl ions.

This equilibrium is governed by the dissociation constant in the following equation:

The term pH is measured as the negative logarithm of the hydrogen ion concentration [H+]: 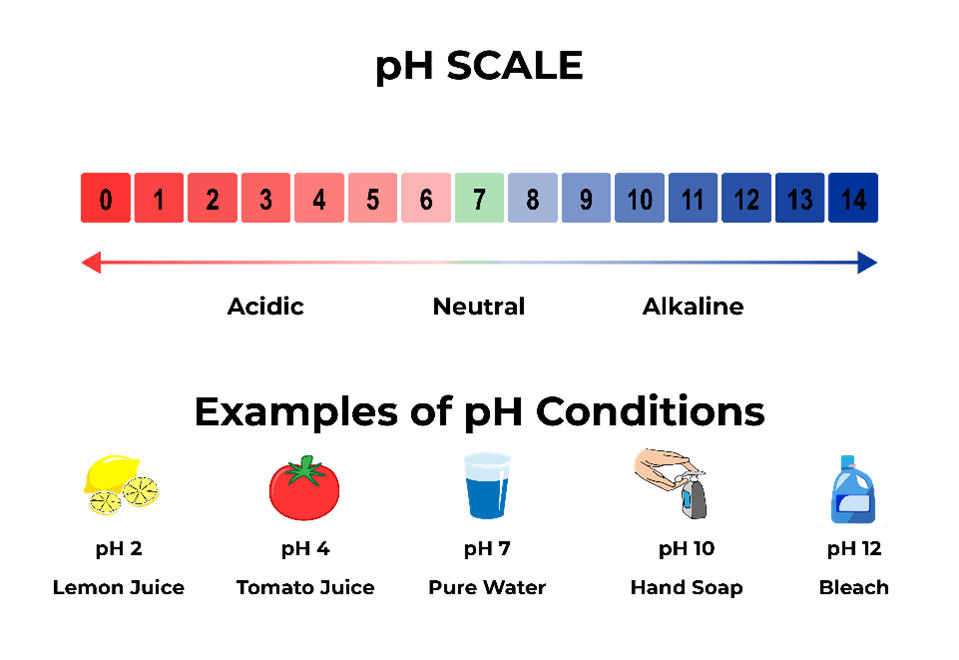 Figure 4: pH scale and examples of the pH for different solutions

The pH scale is an indicator of the balance between hydrogen and hydroxide ions. It is not a quantitative measure of the level of acid or alkaline substances dissolved in water.

Alkalinity is a measurement of dissolved alkaline substances in water (higher than 7.0 pH) that can neutralize the acid. The three main alkaline species are:

The relationship between pH, carbon dioxide, and alkalinity describes the general conditions of water, but it is still important to know the amount of individual alkalinity species in water.

Figure 5 illustrates the distribution of these species against pH, at pH below 4.3, only CO2 is significant, while at pH between 4.3 and 12.3 two inorganic carbon species exist, at pH above 12.3, only CO3–2 is significant, while at pH below 8.3, only HCO3– and dissolved CO2 exist in water. Above this pH, HCO3– and CO3-2 are the predominant species. Of course, above pH 7, the OH– concentration increases and contributes to alkalinity. The concentration of OH– must be known to describe the alkalinity of water completely.

OH– does not have an appreciable effect on alkalinity until pH is above 9.3, where the OH– concentration is above 1 mg/L as CaCO3. 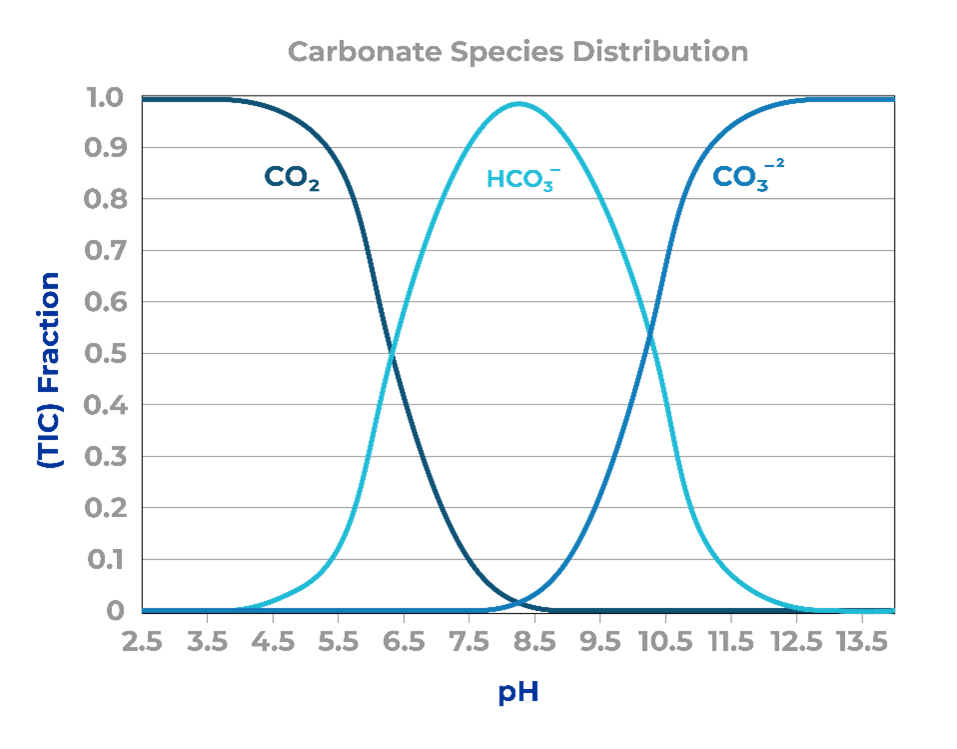 Using these relationships, along with titration measurements of alkalinity described earlier, three types of alkalinities can be defined:

Figure 6: Relationship between P and M Alkalinity and the Hydroxide, in Water

Redox reactions, or what is commonly referred to as oxidation and reduction reactions, are very important in water chemistry, it is part of the fundamental processes in water such as disinfection, corrosion of metallic pipelines, and oxidation of sulfide for odor elimination from wastewater.

Redox reaction can be defined as a chemical reaction in which electrons are transferred between two reactants participating in it.

In an oxidation reaction, electrons (e–) are lost from a chemical reactant, like the oxidation of iron metal in corrosion, which releases two electrons:

In this case, oxygen is an electron acceptor and is reduced, since it gains the electrons. Oxygen can also be called an oxidizing agent or an oxidant.