The micro-floc that is formed due to the agglomeration of multiple colloidal particles during the coagulation process might not be big enough to settle or separated from the water to match the required water quality in the plant. In such cases, the coagulation step is followed by a step called flocculation.

The flocculation step is a gentle mixing stage with a flocculant that gather the micro-flocs into bigger particle size known as pin flocs, then due to additional collisions between pin-flocs a larger particle will be produced which is called macro-flocs, these large flocs can be settled or dewatered easier.

Due to the high molecular weights of the flocculants and the charge brought by them (positive or negative), they can fix the destabilized particles and aggregates along the polymer chain.

Flocculants should be promoted by slow mixing, which brings the micro-flocs gently together, the increase in floc size will increase the probability to adsorb the small unreacted colloidal particles onto the large flocs agglomerate surface.

The main types of the bonds between polymer chain of the flocculant and the destabilized particles are hydrogen bonds and ionic bonds. 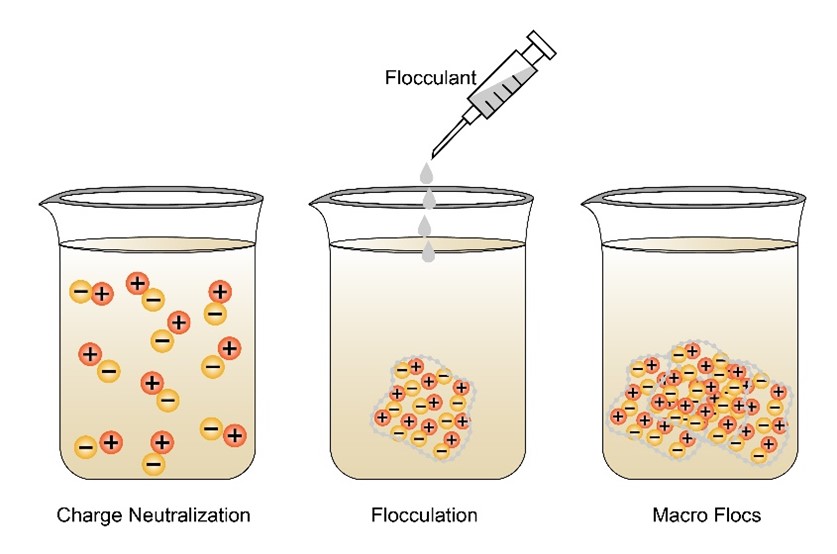 Flocculation is not only increasing the floc size of the particles, but it also affects the physical structure of the floc, making it less gelatinous. This is reflected in faster dewatering rate of the sludge in the mechanical dewatering equipment.

Flocculant is an organic polymer that has charged functional groups, either positive or negative. Polymer flocculants can aggregate the fine solid particles by ionic attraction or by forming bridges

Flocculants are very effective typically at low dosages. Polyacrylamide flocculants are the most commonly used In wastewater treatment.

Flocculants can be cationic (+), or anionic (-) based on the functional group’s charge of the polymer.

The charge density represents the quantity of charge whether it is positive or negative, the charge density can range from 0 to 100%, which means the flocculant can be non-charged and, in this case, it is called a non-ionic flocculant. 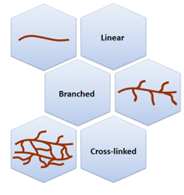 As the flocculant is synthesized from different types of monomers with different functional groups, this makes flocculants vary based on their chemical structure. Typically, Alkenyldiarylmethane is one of the most commonly used monomers to make the chain of cationic flocculants, while sodium acrylate is common to be used for anionic ones.

On the other hand, below is also a comparison between coagulants and flocculants in terms of chemical compound characteristics.

Flocculants are a big class of chemicals; thus, product selection needs an experienced engineer who is familiar with the products and the applications well. Many factors are considered when selecting the chemical of choice, below are the core factors to be considered:

As the first criterion to be considered normal, flocculants are used in many solid-liquid separation applications just as, filtration, settling, and dewatering.

Knowing the system to be treated will help to identify the range of chemicals suitable for it, for example, the polymer used for the belt press is different than the one that should be selected for centrifuge dewatering due to the difference in shearing stress in both systems.

The nature of the feed whether it is sewage water, industrial wastewater, or process water is important to define expected products to work, for example, mineral water such as mining industries typically needs an anionic polymer, while cationic is normally suitable for water with organic content.

Once you have information about the required settling rate, settling time, temperature, and other operational conditions, you can now decide the criteria to be used when testing your polymers in the laboratory to select the suitable product.

The target water quality of the treated water in the plant such as turbidity, TSS, COD, and sludge dryness in case of dewatering is also important to be considered.

The cost of chemicals is also important to offer appropriate chemicals that can match the required quality with the lowest operational cost.

The chemical injection point is affecting the mixing time and speed, which is reflected in the efficiency of the flocculant, in addition in many cases the type of polymer dosing unit that exists at the plant will be taken into account to select a powder polymer or an emulsion polymer for example.

Generally, lab tests are done to select the polymers using many techniques such as jar testing, drainage test, and shearing resistant test using different polymers at a similar dosage, after that the best-selected product is used at different dosage rates to define the optimum dose.

Lab tests are followed with a verification step by doing a field trial at the plant at normal operational conditions, to optimize the dosing rate that can give the target goals of the plant.