Water systems like boilers, cooling systems, heat exchangers, and pipelines have different metallic parts in it, which are made of a variety of metals such as steel, aluminum, copper, and zinc, these metals are subject to deteriorate in a process called corrosion when it is exposed to water in the presence of oxygen, this phenomenon is causing the metal to be transformed to the oxide states, leading to financial loss.

Below are the main problems caused by corrosion:

The Association for Materials Protection and Performance AMPP defines corrosion as “the deterioration of a material, usually a metal, that results from a reaction with its environment.”

Corrosion caused due to different factors; some are caused by REDOX reactions, while others are physical reactions to the environment or operating conditions. Understanding corrosion mechanisms enable us to determine the proper corrosion control strategies. 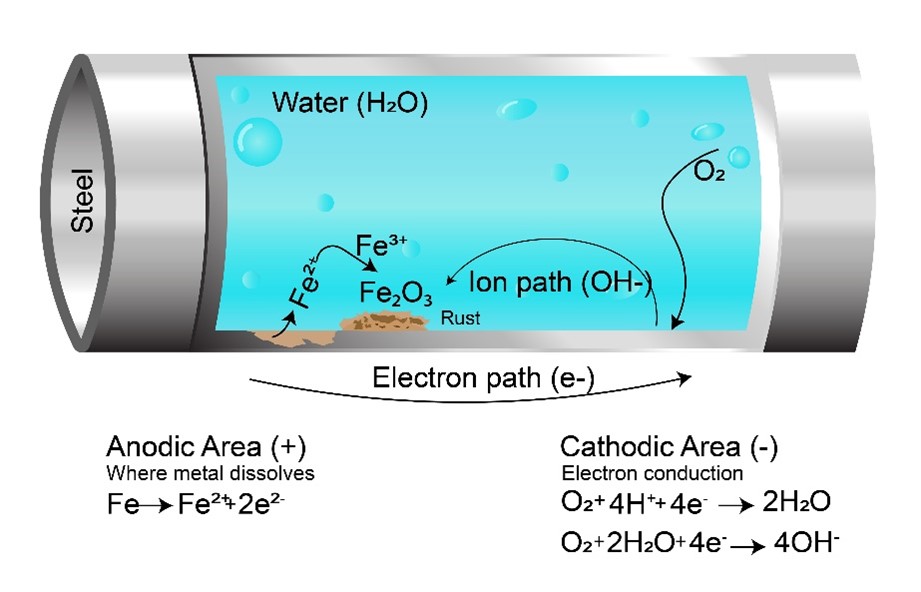 Corrosion control is a key factor to maintain a water system in good condition. Knowing all potential pathways for control is crucial since the corrosion problem may be the most difficult to resolve. Combining multiple potential strategies to reduce corrosion results in a comprehensive solution. Typical techniques include:

As explained in figure 1, mainly three corrosion components should be available for corrosion to be processed, anode, cathode, and electrolyte.

So anodic and cathodic reactions, conduction of electrons through metal, and flow of ions in solution will be the main parts of the process, therefore, any applied chemical that can stop one part of the corrosion reaction will be called a corrosion inhibitor, these chemicals are classified based on how the inhibitor affects the corrosion cell.

Thus, corrosion inhibitors are defined as chemical substances that are added to water to slow down the corrosion rate of the metallic parts of a water system

Chemical inhibitors are classified into four general types based on the method in which they work on the metal to prevent corrosion:

Anodic corrosion work by interrupting the anodic reaction, which decreases the corrosion rate of the metal. These corrosion inhibitors have the ability to form a thin protective oxide layer on the metal surface, leading to a significant anodic shift, and as a consequence, the metallic surface will become a passivation layer, thus reducing the corrosion of the metal.

Oxidizing anodic Inhibitors such as nitrite works on forming rapid oxidation of the metal surface to generate a thin film of metal oxides that is invisible to the naked eye. They do not need oxygen in order to function which makes them a preferable choice for closed systems. 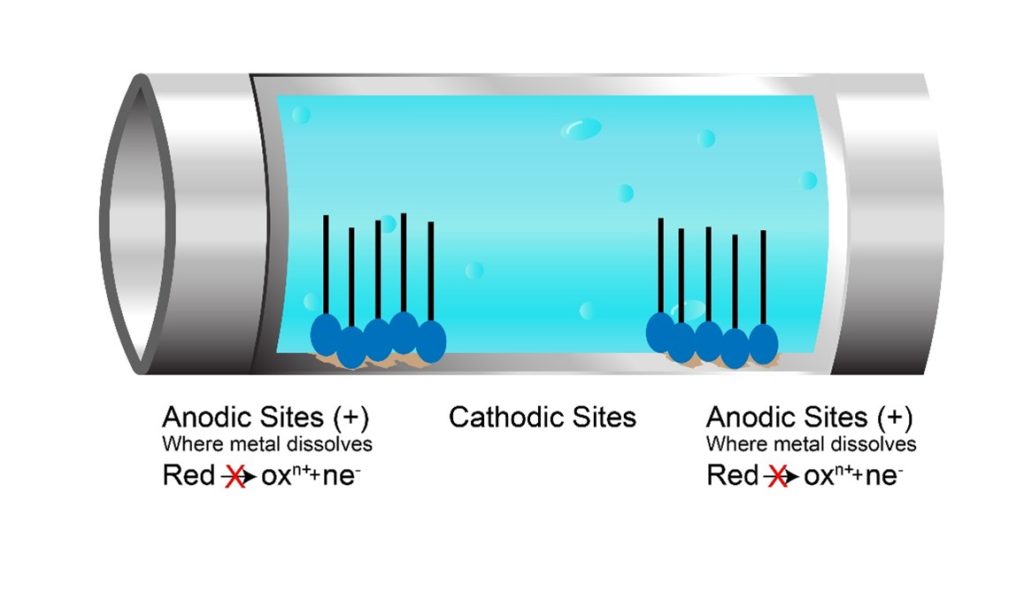 Nonoxidizing anodic Inhibitors such as tungstate are not capable of oxidizing ferrous Fe+2 to ferric Fe+3 and unlike oxidizing anodic inhibitors, this type needs the presence of oxygen to protect the metal from corrosion, making it more suitable for open systems,

These inhibitors can react with metal ions like ferrous iron ions (Fe+2), to form a complex or an insoluble salt that precipitates as a filming layer on anodic sites.

Cathodic barrier films need physical and electrical impermeability to prevent oxygen from physically reaching the metal surface, and to prevent electron flow from the metal through the film.

Typically, hydroxide (OH–), which is formed by the cathodic process, catalyzes the formation of a cathodic barrier film. Localized high pH (10-11) at cathodic sites causes precipitation of different compounds that create layers of inhibitor.

The main challenge of selecting a cathodic inhibitor in a treatment program is to ensure that pH driven mechanism is taking place and that thermally driven precipitation of the inhibitor is limited. Thus, when selecting a treatment program using a cathodic inhibitor, it is mandatory to select a polymer that can avoid thermally induced precipitation, while enabling the protective pH-driven mechanism to take place. 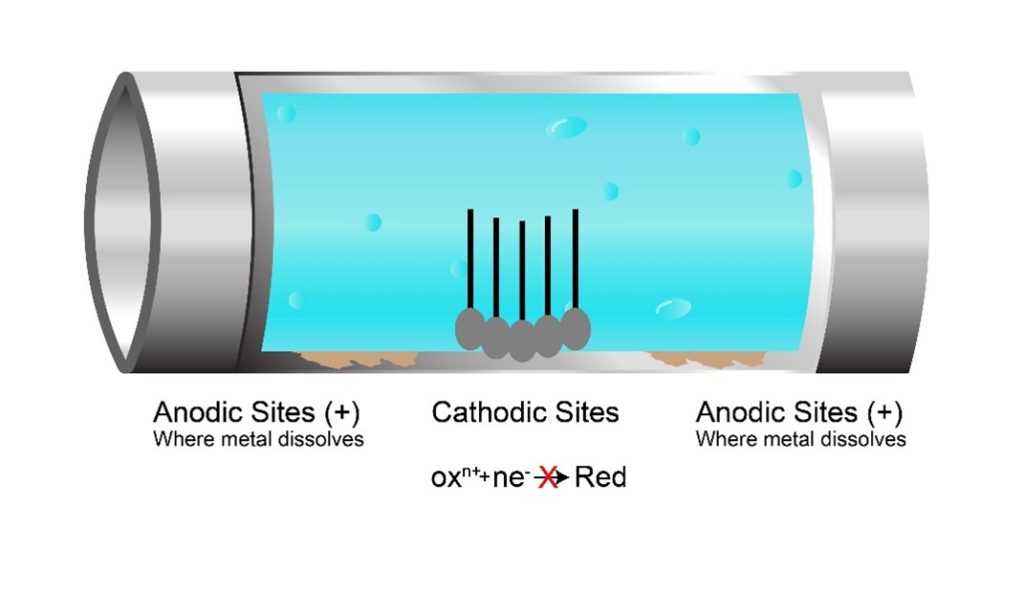 At high temperatures or closed systems such as boilers the efficiency of the cathodic inhibitor reduces to extremely low rates, thus, stopping the cathodic reaction can be done here by removing the dissolved oxygen from water using reducing agents such as sulfites, these types of chemicals are called oxygen scavengers.

Some oxygen scavengers such as hydrazine, are not only reducing the dissolved oxygen levels but also encourage the growth of a protective magnetite layer.

It is obvious that stopping both cathodic and anodic reactions will give better protection for the metal, this can be achieved using a combination of both anodic and cathodic inhibitors, in this scenario we can get a synergistic effect leading to lower corrosion rates compared to the use of either inhibitor alone, even at high dosage. This treatment strategy can minimize the risk that may occur when utilizing a single type of inhibitor alone, for example, using an anodic inhibitor alone might have the risk of pitting corrosion if the inhibitor dosage was lower than recommended levels. 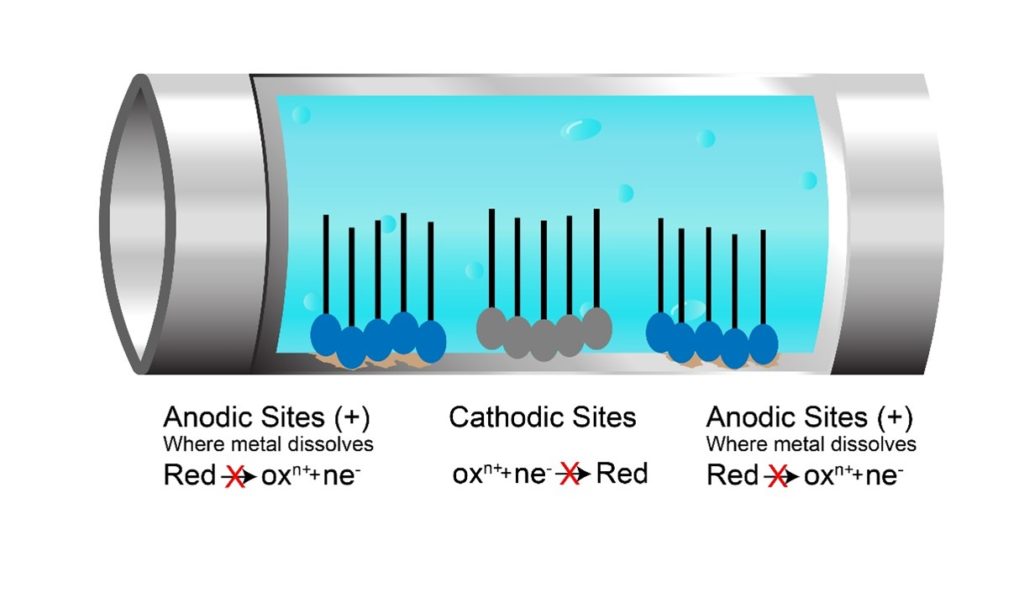 Combinations of inhibitors lead to having a bipolar film, the first one of metal oxides that are created by the anodic inhibitor, this layer prevents base metal dissolution, while the second is a barrier film formed by the cathodic inhibitor, which hinders electrons from being transferred to oxygen.

This type of corrosion inhibitor builds an inhibition film on the metal surface primarily by adsorption, which limits corrosion. Film-forming inhibitors are mainly organic materials that can provide a monomolecular barrier between water and the metal surface to protect it from corrosion. The drawback of these inhibitors is having a tiny break in the uniform film will cause an acceleration of the corrosive agent attack to the unprotected zone, leading to metal penetration. Therefore, film-forming inhibitors such as azoles should be dosed continuously to maintain the protective film.

Volatile corrosion inhibitors (VCI) are chemical compounds that work on reducing corrosion by a combination of volatilization, vapor transport in the atmosphere of an enclosed environment, and condensation onto the surface of the metal, where the rate of corrosion of metal is thereby inhibited, these inhibitors are mainly used to control corrosion in boiler condenser tubes. They work at the vapor phase and thus they are also called vapor phase inhibitors or VPIs.

VPIs such as morpholine work by neutralizing the pH of the boiler steam to be less acidic, which is less aggressive conditions to the metal in order to control corrosion.